Read The Latest Blog Posts and Articles Recent Posts! the perfect playground to explore and be inspired by art. 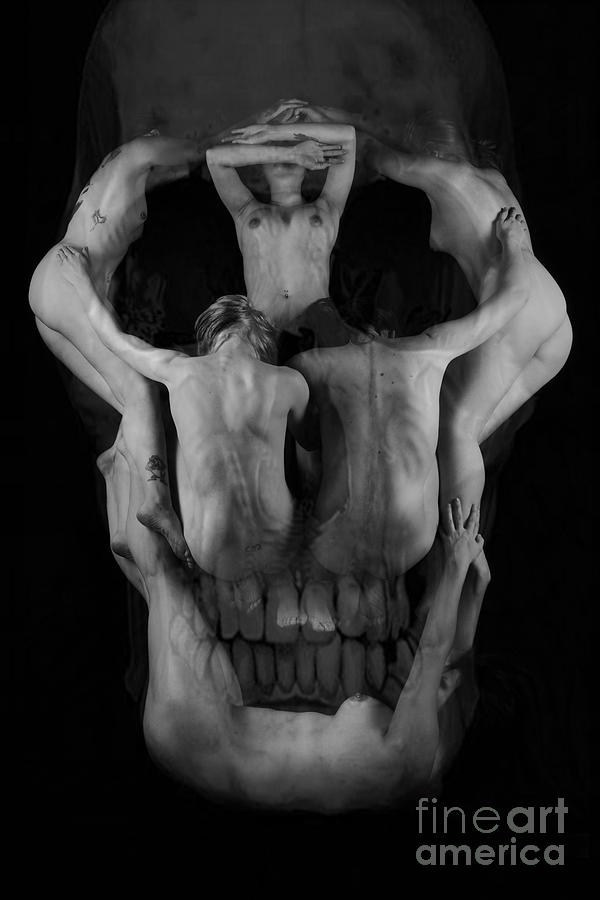 
The combination of Lesha, Nikki, Megan, Yvonne, and Katerina conjures powerful connotations of death's cold purity and the human form as a liminal space between life and death. Much like a Day of the Dead celebration, it celebrates and lionizes the dead without becoming grossly macabre.

The women shape a skull with their form. Two eyeholes are created by the women arcing their form, while teeth are conjured by using the feet of the women forming the jaw. However, looking more closely, there are far more teeth than there could be feet of the ten models. The bottom part of the teeth must therefore be a non-human component.

In fact, non-human components like a painting for the brow help to establish an important theme. In death, humanity returns to being of the same type as other elements of matter, no long different in some undefinable way. But since death itself is only a difference of degree, not a difference of quality, from life, even the women themselves are of the same material in some way as the non-living elements that fill out the shape of the skull.

The fact that women tie their bodies together to make the skull shows the connection between woman as lifegiver and deathgiver: By granting life, women logically grant death. The artist has numerous works that emphasize women as Earthmother and childbearer, so this is a logical commentary on those themes. The women themselves are bony enough, through their own merits, that they seem to be gaunt enough to be almost death-like themselves. Further, the skull shape perhaps human, but is in fact like an animal, a predatory creature, emphasizing death as the ultimate predator. By having living and non-living elements come together to make a symbol of death, the piece emphasizes that life and death are a part of the same continuum, life between unliving and death. A tribute to Salvador Dali, Intelligence without ambition is a bird without wings.© Robert WK Clark

Looking at this art work, I can surely confirm that it is a real representation of a human skull. The artist has used different styles of women to pose in a manner that they form imagery in the viewer’s mind. The color used to make the image is also great and the presentation together with the way these creatures are intertwined shows a lot of creativity. Every part of the skull is clearly visible and one can see sections such as eyes, nose and the mouth. The black background to which the image is created is also great and in general, the artist has done an exceptional work.

The human skull naturally is one of the strongest things created. Even in death, the skull takes donkey years to as much show first signs of decay. In this work of art here, we can see six nude models all striking different poses to achieve an ultimate one in the human skull. The artwork in my opinion tells that it is only together we are strong. Through unity and collectively working together, strength can be achieved and nothing can tear down that strength.

This photograph represents death and mortality. This skull with its large eye sockets displays a degree of neoteny which humans often find visually appealing, yet, a skull is also obviously dead.The skull is one of the oldest and most powerful of all symbols. It has been used to symbolize both side of the spectrum and therefore have diverse meanings to different people. For some, it represents death and even evil, but others view them very differently. I view this skull as protection, strength, power, fearlessness, wisdom and guidance, overcoming death, surviving through a difficult time, or even immortality.

At first this image was scary to me mainly due to the teeth looking objects and the thinness of the bodies. However, after careful observation I found it to be original and detail orientated. The positions of the bodies are perfectly placed. It almost resembles a face of some sort with the darkness and spacing of the bodies at the top of the photo. The color adds to the darkness of the photo as it is definitely not an uplifting piece. It is however very artistic and creative. I would consider this to be as unique as possible and inspiring to other artists.